Uber has definitely made a splash in recent years as an alternative to taking a traditional taxicab. Up until 2015, it was not possible to catch an Uber in Costa Rica, but due to a number of different disputes that the company had with the government, they overcame potential issues holding them back and they are now capable of providing services in this great country.

In fact, the term “Uber” is now synonymous with getting a ride to and from your destination of choice. In fact, the name of this company has penetrated the society so quickly that it is now a part of everyday speech and has breached the vernacular. 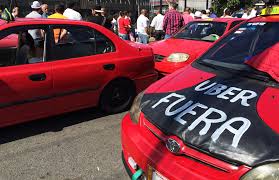 Uber coming to Costa Rica pissed off many taxi drivers.

Why Would Anyone Take an Uber in Costa Rica?

Just like anywhere else in the world, it’s good to have alternative options for transportation. Sure, you can take a bus, train, or taxicab, and there’s absolutely nothing wrong with this, but some people prefer to have an inexpensive, potentially safer alternative to get from where they’re going to where they need to be. In fact, if you’re visiting San Jose in Costa Rica, you should definitely consider using Uber as your option of choice since it seems to be the most reliable when you need to get to the airport, the mall, or you just feel like hanging out downtown.

As an aside, the taxi’s can be very shady in Costa Rica, especially if you don’t speak Spanish!  Some of them even have “hot meters” that add up the fare at a lightning speed.

The Best Tips for Using Uber in Costa Rica

To make the most of this service, we’d like to provide our favorite tips to help you truly capitalize on this transportation alternative. We’ve noticed that Uber is great in some ways but not necessarily the best option in others. So we’ll tell you about our experiences and the ways we use the service to certainly make the most of it.

Our favorite tips include:

It’s great that Uber is now available in Costa Rica. Hopefully they’ll be able to expand their areas of operation in the future and cover the entire country, but we’re happy that they’re covering the San Jose area for the time being.