The official currency of Costa Rica is the Colón.  When you say it plural, they are called Colónes.  They are colorful bills, with many coins circulating as well.  When traveling to Costa Rica, you don’t need to worry about visiting a bank and trying to take out the local currency, and it’s doubtful that most banks will carry the Colón, and if they do it will be in small amounts.

U.S. Dollars are widely accepted throughout the entire country, or you can always go to a bank, hotel, or just make change at the airport.  (Although they don’t always offer great exchange rates.)  Debit and credit cards are also widely accepted in the country, but if you travel outside of the Capital (San Jose) you may find that American Express isn’t widely accepted.

What is the Best Currency to Bring to Costa Rica?

If I am carrying U.S. Dollars, and want to make things easy on myself, I carry $20 or smaller bills.  People lack trust in $50 and $100 bills, namely because there have been counterfeit problems in the past with those bills, and of course, there is a risk for anyone accepting them.  Plus, locals won’t always have change the way people may in the U.S.A.

When you do spend these bills, expect to get your change in the local currency.  9 times out of 10, you won’t get Dollars in return, and you may get beat up on the exchange rate.

Pro Tip:  change out whatever you think you’ll spend during your trip at a bank.  Use that local currency throughout your trip.

Pro Tip #2:  when you buy things priced in Dollars, pay in Dollars.  When things are priced in the Colón, pay in those.  You’ll save on exchange rates and the typical Tico errors.  Anything from hotels, to taxis, to clothing, try to pay in whatever currency they are advertised in.  Taxi’s will always be local Colónes.  If not, you are getting hustled. 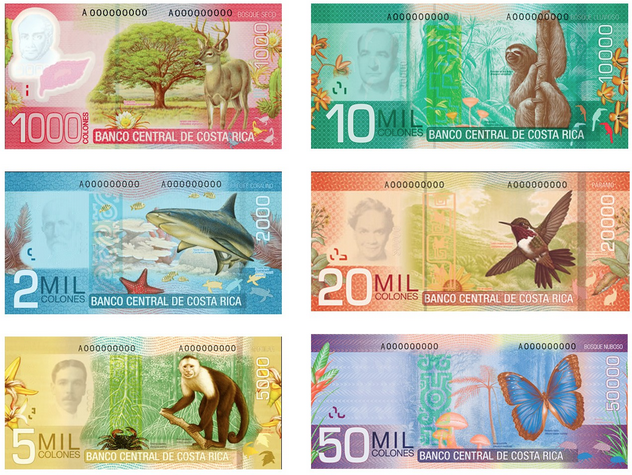 Pictured is every bill Costa Rica offers as currency.

The only place you can confidently pay in one currency and not worry about getting hosed is the super markets (the big ones, not some Mom and Pop shop) because they program their systems to convert the currency to the daily exchange rate.

I’ve had many problems with people trying to round up in their favor.  (Mostly taxistas.)  If you follow my guidelines, you’ll be saving yourself some money as well as many headaches of dealing with this madness.  Pura Vida!

In 2012, Costa Rica issued the ¢50,000 bill.  Depending on fluctuations, this bill is around $85 – $100.  This was a major release, which also came with a ¢20,000 bill, because prior to this, the largest denomination was the 10,000, which made carrying large amounts of local currency somewhat of a task unless you had a backpack.