With re-gentrification in the uppity neighborhood of Barrio Amon, a small pocket of downtown San Jose, one has to ponder if the questionable business practices of New Fantasy Massage will survive?

After reading the article posted here – https://news.co.cr/can-new-fantasy-sex-parlor-resist-re-gentrification-costa-rica/71184/ one has to question if this long running “pension” (another word for a love motel) is on it’s last legs.

How Long Will the New Fantasy Remain Open?

Any sport fishermen – err – sex tourist who visits San Jose definitely knows this spot.  With a budget price point for a massage and more, even the local Ticos are able to partake in the daily activities at the New Fantasy Massage.

While you will certainly hear of sex tourism and immediately think of the famous Del Rey Hotel and Casino, this revamped mansion in Barrio Amon has somehow passed many raids with flying colors and has remained open for as long as this Gringo has been making trips to Costa Rica (2000.) If you don’t see the armed guard, and subtle sign, you may mistake this elegant mansion for a beauty salon or residence – yet what happens inside is far from fitting in with the area that features boutiques, cafe’s, and art galleries.  In what is said to be an area of San Jose controlled by wealthy families, it’s odd that a business of this nature has survived this long.

While the sex tourism business has rapidly declined over the last decade, it still exists.  Many of the sex workers have moved out to the booming Jaco Beach area, namely the Cocal Hotel & Casino, where there is much more to do for the average tourist, and sex tourist, alike.  Golf, four wheeling, a full marina offering sport fishing, and just the luster of having a beach, albeit a black, dirty beach, all attract tourists who are opting to move out of the dingy, smokey, cloudy San Jose bar scene.  While there is nothing like people watching in San Jose, enjoying ice cold Imperial’s, and chatting it up with people who will tell you anything to make you seem impressed, the appeal of a mountain-surrounded beach town is certainly driving many away from the once unstoppable San Jose Gringo scene.

The permit which allows the massage par-lour to operate is called a “pensión” – which again loosely translated this means a “love motel.”  The establishment has been operating under this premise for quite a while, and while the law (to me at least) has been somewhat unclear as to what this exactly means.  When people are engaged in “more than just massages” and “condoms are found in rooms” (according to reports) – it’s clear why the place has been raided frequently for several years.

In fact, in this La Nacion article, you can see that the below comment suggests it’s far more than a place to get some aches and pains rubbed out of your body.

“A 60-year old man was arrested on Thursday on suspicion of pimping in the massage parlor he administered. The raid was conducted by agents from the Human Trafficking Investigations division of the OIJ and by Municipal Police officers.” 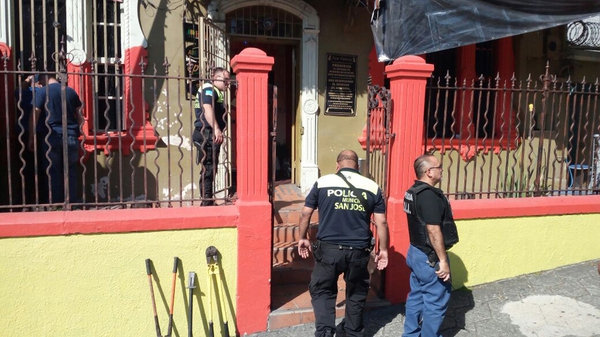 The infamous Barrio Amon massage joint is raided in 2017.

While prostitution is legal in Costa Rica, pimping is not.

Side note:  our Editor’s do not endorse or promote prostitution. We are simply conveying information about Costa Rica so tourists and locals can be informed.  In no way, shape, or form are we connected to any business mentioned in this article.

It’ll be interesting to see what happens in this iconic area of San Jose.  Please weigh in with your own comments, we’re curious to know what you think!