When you think of the cocaine trade, you typically think of Colombia and the infamous Pablo Escobar, but that doesn’t mean that there isn’t nose candy flowing through the streets of our beloved Costa Rica as well.

From a report in news.co.cr, authorities seized 324 packets of cocaine (each weighing around 1 kilogram) in a vessel off the coast of Quepos in Puntarenas.

That’s a Lot of Coke!

According to the report, the seizure was made about 80 nautical miles off of the coast and the interception was made by a joint venture of the National Coast Guard Service, the Drug Control Police, as well as the U.S. Coast Guard who was apparently the first authority to detect the illegal activity.

Once the criminals knew that they were spotted, they were witnessed throwing bags overboard and started to flee. It is unclear whether these bags that were tossed overboard were recovered, but there was plenty of drugs left over on the boat at the time of apprehension to make a big seizure for the government and get the traffickers put away. 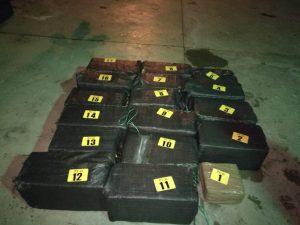 A portion of the seizure (photo credit: https://news.co.cr)

I’m not one to engage in illegal activity, but you have to imagine that a small vessel like that way off the coast just trolling along isn’t a group of fishermen, and is probably up to no good. Not very inconspicuous. Maybe next time they should disguise their plans a little more and take to the streets, perhaps with a discreet truck dispatcher service of sorts. Sure, it is definitely a slower route, but they could just look like another delivery truck and avoid detection. Then again, they were probably going international with this stash, so they’d surely be caught at the border.

In any case, it’s good that this stuff is out of the hands of criminals and prevented from reaching its destination, wherever it may be. As long it stays out of our beautiful communities. My guess is that it originated in South America (the vessel was flying an Ecuadorian flag) and was on it’s way to Mexico or the U.S. Good for the authorities to detect this and stop it while in-transit before it could get to its next stop.

As one commenter on the article states, this is small potatoes (relative to the amount of coke that was flowing from South America to the US back in the ’70s or ’80s – remember the weekly hauls by plane in Blow with Johnny Depp) though it is still a major seizure. I can’t even begin to figure the street value of over 300 pounds of coke, but it has to be a whole lot of money that won’t be illegally changing hands anymore.

I imagine whoever is behind this trafficking won’t be taking that route anymore, nor will the three men on the vessel be seeing the outside of a jail cell for the foreseeable future. There will surely by more drug movement in and around our beautiful country, and I hope the authorities are just as quick to detect it next time around again. Great work on this one!